In general, people are more likely to interact with things that they can do online. As humans, being the social beings that we are, we try to connect with others and make friends. Gaming is the perfect window for making new friends in an online environment while having a shared hobby or passion.

Everyone is trying to get a piece of the new mostly online and mostly-at-home audience. More people are turning into full-time or serious gamers. They’re talking about their favorite games, streaming their gameplay, and looking for better gear and hardware for gaming and streaming purposes.

Now, when I say that the entire gaming hardware industry is, collectively, gearing up for increased sales and pouring more money into research and development to have a bigger slice of the pie, what do I mean precisely?

Well, the reports are in.

The entire gaming hardware market has undergone a massive transformation, albeit steadily, throughout the years 2020-21.

And companies are adjusting their forecasts for both demand and sales. And they’re only adjusting it positively.

Many companies are forecasting up until 2026 or beyond. They believe (and rightfully so) that the current trend will pan out to be extremely beneficial, money-wise. And as a result, they don’t have to worry about a lot of profit-making troubles that usually come with running a company.

Fortune Business Insights is out and it’s been the final confirmation. The speculation that gaming hardware and gaming gear manufacturers (and gaming brands in general) will win big has distilled into a hard, cold fact with this report. The final nail, so to speak.

So, the report points out (as you can read on the report by requesting a copy here): 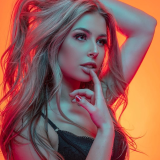