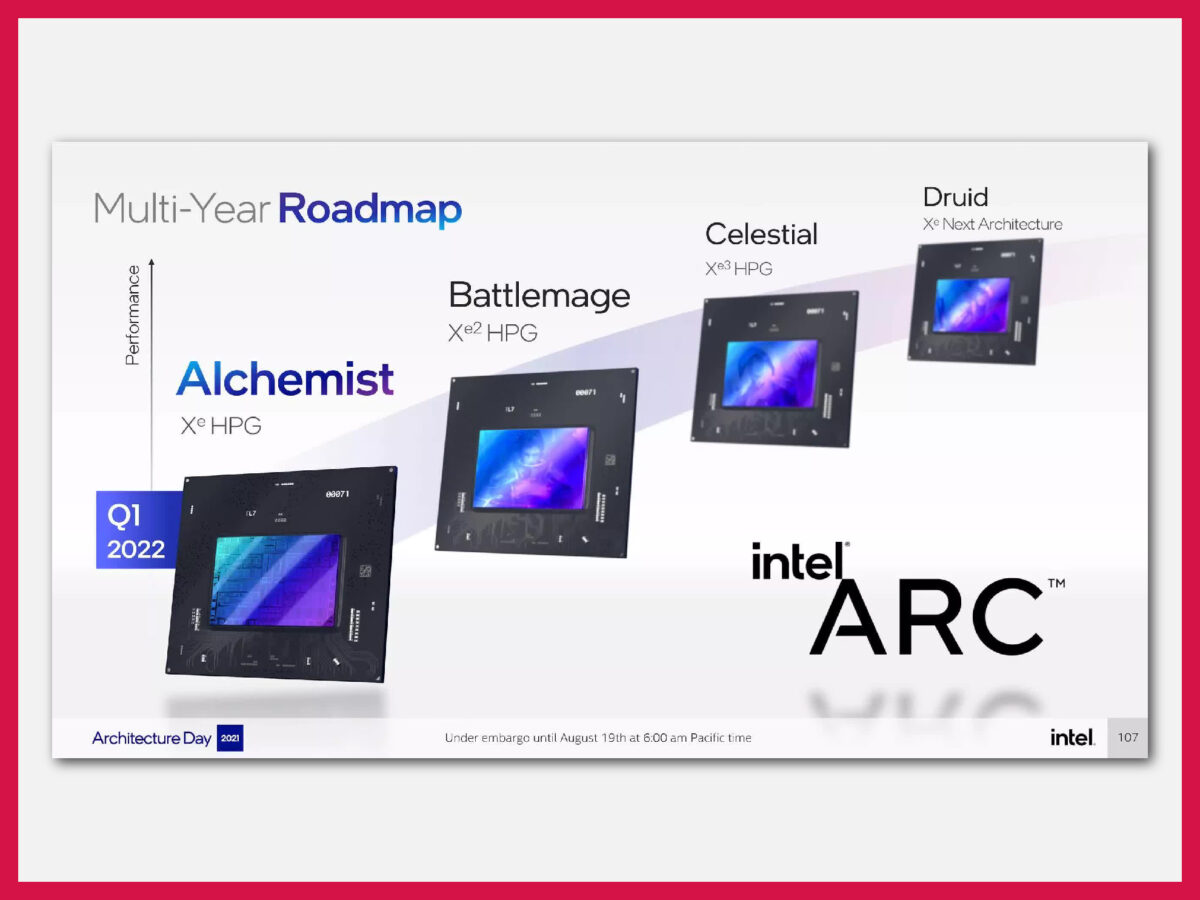 Intel Arc Alchemist is coming in the first quarter of 2022, but what exactly is it? Well, Alchemist is the code name for Intel Arc’s new line of GPUs, which is going to be competing with AMD and Nvidia in the ultra-competitive GPU market.

In the midst of GPU wars where already two prominent competitors are hyping up their new releases in the upcoming year, there is a less prominent name attempting to enter the fight. With the Intel Arc lineup, Intel is eager to be finally competitive in the GPU market.

After Nvidia dominated for years in the world of GPU, the rivalry between AMD and Nvidia is heating up with their upcoming and most awaited releases. All of this provides a perfect occasion for Intel to enter the market which it took as an opportunity to reveal its first proper discrete GPU, the Arc Alchemist lineup, next year. Let’s have a look at how Intel Arc Alchemist will fight in terms of performance and price.

What is Intel Arc?

Intel is going to use the Intel Arc that is the branding for “upcoming consumer high-performance graphic products.” The name encompasses multiple generations of graphic cards which are targeted specifically towards gaming, and shouldn’t be confused with Intel Xe. The Arc products use the Xe architecture, but you need to remember that not all the Xe products live under Arc.

The products of Intel Arc are based on Xe HPG. The same architecture is being used by Intel in mobile and desktop applications, opening with the first-gen of Intel Arc cards. Formerly known as DG2, the first-gen cards now have a codename that is Alchemist.

At Architecture Day 2021, Intel gave the world a deeper look at the Xe HGP architecture that is powering the Alchemist cards. Up until now, all we know is that the flagship card will feature 512 execution units across 3 Xe cores. According to speculations, the flagship unit looks fit to compete, with 512 EUs for 4,096 cores along with up to 16GB of GDDR6 memory.

The cards come close to being similar to AMD and Nvidia. It looks like that the 384 EU model for a total of 3,072 cores with 12GB of GDDR6 memory will be competing with AMD RX6700 XT with 12GB of memory, but the spreading rumors also suggest that when it comes to performing the card will come closer to the RTX 3060.

The information about pricing hasn’t been revealed yet by Intel. With the Arc branding for all Xe HGP graphic products, after this point, we are talking about the oncoming generating of Arc cards – Alchemist.

As for the release, the first cards are supposed to be arriving in the first few months of 2022 according to what Intel conveyed. It is rumored and also been considered as a possibility that Intel would release the cards at CES 2022, the event which happens in January.

There is also not much information available about the pricing, but if we consider all the rumors flying around, the flagship card should cost around $600. Even though the cards will be arriving soon, they will still be difficult to find. Intel has also stated that it may not have enough supply to meet the demand, which is quite unsurprising but a downer anyway.

Lydia Miller
Lydia has not always been fascinated by games especially when they include gruesome violence. But she’s always been infected with the bug of strategy gaming. Competitive strategy gaming? Now that’s just way better. She likes to stream her misplays often on Twitch. Her specialization on Spearblade includes the news section.

The gaming industry has seen an exponential growth in 2020-21, and the reports suggest an exploding market ahead.

The pandemic has created a more conduvice environment for gaming companies including indie studios. Here’s how.

The RTX 3090 has been restocked on multiple websites including Amazon, Newegg, Best Buy, and more. The demand of GPUs in China (mainly for Bitcoin mining purposes) has been slashed thanks to a drop in Bitcoin prices (and other cryptocurrency prices) as a result of market movements. This can be the beginning of the end of GPU shortages!

Pride month is just in (June). Here’s how the top gaming hardware brands (and gaming brands in general) are showing their support and helping spread awareness for the cause.

The modern gaming hardware market looking like it’s all about 4K gaming at 60+ FPS. Nvidia has already released its 30-series of GPUs that gives a truly massive performance, but chances are, AMD is going to trump or at least compete really well with its “Big Navi” – prices for which are currently unavailable.

The fine detail here is that it’s the CPU that’s responsible for the cooling system, not the GPU.