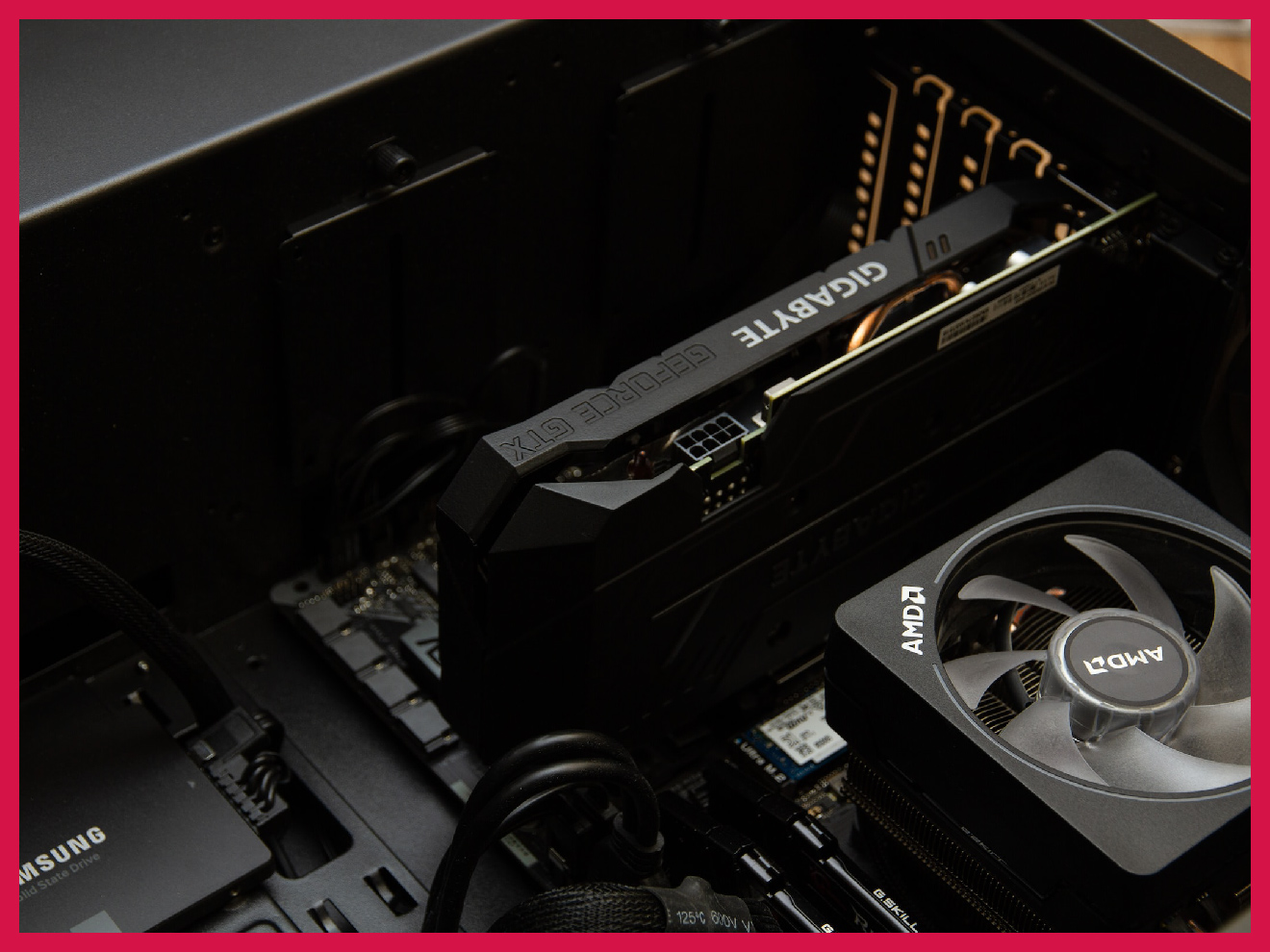 This is an argument of convenience vs. cost-effectiveness or lack of knowledge vs. upgradability and customization.

Building your own PC is a great way to save money and learn more about the inner workings of computers. On the other hand, buying a prebuilt gaming PC can be more expensive but it takes out the hassle of assembling.

Building a PC yourself can sometimes be a daunting task – especially when you have no prior knowledge or experience. What goes where? What does this term mean? And so on.

I don’t want to scare you but first-time PC builders are generally looking forward to a lot of things that could go wrong. But at the same time, it’s a great skill to have.

I’d recommend you start learning. PC building is a great skill. It helps you save a respectable amount of money and it allows you to upgrade your PC later down the line.

We have a complete guide on building a gaming PC. Also, a list of all GPU series by their MSRPs and the parts list for the most “average” gaming PC in 2022.

Prebuilt PC vs. building a PC

Prebuilt PCs are well-built, but there’s usually no way to customize them. The systems come with software preinstalled and most users likely won’t upgrade them. They are optimized and tested to work out of the box. This alone is reason enough for many gamers to go with them.

Building a PC, on the other hand, gives you much better control. You have a lot of options to choose from (given they are compatible and sufficient). This improves the performance you get for your money.

Prebuilt PCs tend to be more expensive, but they also come with the benefit of being ready to go out of the box and having already been configured for optimal performance. If you’re just getting started in PC gaming, or if you want a high-end rig for work and play, then prebuilt might be the way to go. But if you’re trying to find budget options, building your own will save money in the long run.

Generally, there’s nothing wrong with prebuilt PCs. Make sure you read or watch its review, as some might have problems. Check how well they handle cooling.

For most gaming purposes, prebuilt PCs work sufficiently well and the user never has to worry about anything. If faults or crashes happen then you can just give the manufacturer a call. They might charge for consulting, repairing, or parts, and having no idea about the problem means they can easily overcharge you – but that’s a tradeoff inherent to prebuilt systems.

Prebuilt PCs might include cheaper alternatives sometimes – such as memory from obscure brands – in order to cut costs. This isn’t always the case, however, especially with reputable sellers.

Is a prebuilt gaming PC right for me?

As long as you see its review and have some idea about the parts – then yes. If you have never built a PC – then yes. If you have never even installed Windows on a PC, let alone built one, you most definitely want to buy a prebuilt PC. Locking the processor in the socket and applying the thermal paste for the first time alone is infinitely more difficult than setting up Windows on a new PC.

If you have some experience and knowledge of parts then I’d recommend learning how to build a PC first. It’s simply a more rewarding experience apart from being more cost-effective and upgradeable.

Pros and cons of building your own PC

If you want to build a PC yourself, it’s cheaper than buying one from a manufacturer. It’s also more rewarding and satisfying, as you get to customize your rig.

On the other hand, building your own PC means taking on greater responsibility for your system’s software and hardware components. If something breaks down in the middle of the night, there’s no guarantee that you’ll have access to replacement parts on short notice.

Building a PC yourself can also be a major time sink. It’s the only way to get the exact components you want, but it’s also super frustrating because it can easily take forever.

The process involves lots of research, visiting stores, ordering parts at home, installing them, and then waiting for them to arrive. It’s time consuming and expensive, which is why most people go with prebuilt PCs instead.

What if you could have decent hardware, if slightly overpriced, without having to build anything? That’s where prebuilt PCs come in: They’re built by companies like Dell or HP and shipped directly to your door ready to plug into your monitor and keyboard.

Should I build my own PC myself?

I definitely recommend this as long as you do your homework and follow a guide strictly.

Building your own PC also allows you to customize your rig as much as possible — including choosing from different processors, RAM, storage devices, and graphics cards.

The most important thing to consider when deciding whether or not to build your own system is cost — how much money are you willing to spend? If it looks like it will cost a lot anyway and there’s a good prebuilt PC available in that price range, you should just go with that option.

If you’re on a budget then you should seriously consider custom-building a gaming PC.

You can save money by building your own PC instead of buying one off-the-shelf. Prebuilt PCs often come with expensive hardware bundled together with some additional cost for assembly. Also, if you build a gaming PC yourself, you might be able to get better prices on the same components — such as RAM and hard drives — depending on where you live.

A prebuilt gaming PC is decent for gamers who don’t know how to build a PC. PC gaming setup isn’t an easy task and they take out all the setup and configuration hassles.

All you’ll need to do is do your research and find the best prebuilt gaming PC for you.

Most prebuilt gaming PCs are optimized and tested with the necessary software installed. This also means you don’t need to install Windows, update it, add the basic software, install graphics and other drivers, etc.

Manufacturers of prebuilt gaming PCs also provide aftersales support so if something breaks down, you know the solution is just a phone call away. If a custom-built PC breaks down, you have very few options if you’re not good with troubleshooting.

How do I learn to build a PC?

There are many tutorials out there that can teach you the basics. Watch as many videos as possible and note down what goes where. Styles, sizes, and shapes may differ but the basic components usually follow a system when it comes to assembly.

Personally, I learned it after watching others do it. That is the best way because you can ask questions. You can see what goes where. And … suddenly, this became awkward.

A basic PC is a collection of multiple parts such as a processor, RAM stick(s), SSD and/or HDD, a video card, a power supply, etc. Most of the stuff goes on this tray called a motherboard. Everything is wired up and powered. A few things are easier to install like RAM sticks snapping into place, while others are slightly harder like a video card must be first connected with the board to the x16 slot, then powered via the PSU with a PCIe cable.

We have a PC building guide for you that goes into the detail of each major component and how is it placed, connected, and powered.

If you’re not comfortable with the process of building a PC (or if you’ve never tried), then building your own PC is probably not for you.

The good news is that most people don’t need the experience of building their own PCs; they simply need to know what components are available in their price range — and which ones will work best together for their intended purpose.

There will be a prebuilt PC for that. Or something close to that.

Building your own PC can be a huge commitment of time and research. There’s also risk involved. But it’s a rewarding skill, more cost-effective, and ensures easy upgradability.

One thing to keep in mind is that prebuilt PCs are not perfect, as they can have minor glitches and problems with them when you open them up. This happens more often than you might think, especially if you’re using a computer that was built by someone else.

The biggest downside to prebuilding your own PC is that you won’t know what kind of brand is inside for many components. Though most of this information is provided in the product description, brand names of less important parts are generally avoided if they are not known ones.